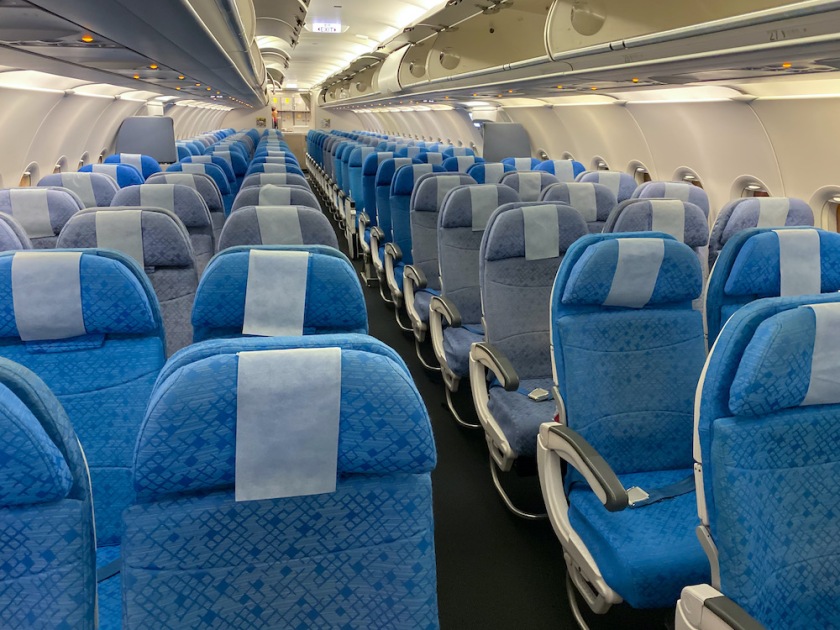 I had a three-hour layover in Shanghai. Three hours was the right amount of buffer when you think about it. But in reality, it wasn’t, especially dealing with immigration formality at Shanghai Pudong International Airport (PVG).

To give a background, I bought my ticket from American Airlines (AA ticket stock), but my flight from Shanghai to Hong Kong was marketed and operated by Cathay Dragon. That means my systemwide upgrade was only valid for the American Airlines segment from Los Angeles to Shanghai. Therefore, I would be flying Cathay Dragon in the economy.

I spent about an hour at the newly opened Cathay Pacific Lounge. I figured I’d have my dinner there. I then headed to my gate about 10 minutes before boarding. I was among the first passengers to board, thanks to my Oneworld Emerald status.

The cabin looked like the typical narrow-body jets. Even though this was a Cathay Dragon fleet, it didn’t feel like a budget airline. In fact, every seat is equipped with a personal inflight entertainment system.

In terms of legroom, I thought it was decent. But again, I’m not a tall person, so seat pitch never really bothered me unless it’s less than 30 inches. On this particular Airbus A321 plane, the seat pitch ranges between 30-31 inches.

Boarding took longer than expected due to the malfunctioning overhead compartment latch located right above my seat. Probably three to four maintenance crews were trying to fix it, but they couldn’t. The scheduled departure time pushed back by 40 minutes as a result. The flight attendant politely asked the passenger whose bags were stored in that bin to be checked in. I told them that I would be connecting onto my next flight in Hong Kong, so instead, they moved my carry-on to the Business Class section. I wish they moved me as well. 😉

We finally took off behind schedule. Since I ate in the lounge, I didn’t feel hungry. But I pre-ordered a Moslem special meal (MOML). I’d give it a try for a review because special meals tend to be better than regular ones.

The meal came in a tray along with fruit and salad.

I’m not a picky eater at all. In fact, I can’t think of anything I don’t like. Even if it’s something that’s not very good, I will finish it because I hate wasting food. I hate to say this, but the chicken was disgusting. It was rubbery, and the white sauce was just gross.

I had a few bites of the shrimp salad, and it also tasted weird. The texture of the shrimp was just weird — almost like fake and artificial. I ended up only eating the fruit.

The regular meal choices were either fish with pasta or chicken. My seatmate had chicken, and it looked much better. It also came with Häagen-Dazs ice cream. As you know, I have a sweet tooth, so I asked the flight attendant if I also could have the ice cream. My request was declined. She said I already had my fruit that was included in my special meal tray. Alright then.

My seatmate didn’t really want her ice cream, so she offered hers to me. I can’t say no to ice cream, and I thought it was a really nice gesture of her.

Other than that, the remaining of the flight was uneventful. We started the initial descend and landed in Hong Kong 10 minutes ahead of schedule despite the delay.

It wasn’t a bad flight. In general, the product and service of Asian carriers tend to be better than what we’re used to in the United States. The cabin was also decent, considering it’s not Cathay Pacific mainline — It did not feel like a budget airline. I rarely watch a movie in flight, but having a personal inflight entertainment system is a nice touch.

The downside was the meal I ordered. I ordered a special Muslim meal, which was chicken with some white cream sauce. I thought it was pretty awful. It makes me think that American Airlines’s microwave TV dinner really shines. It also sucks being told no when I asked for ice cream. I guess I got what I paid for.