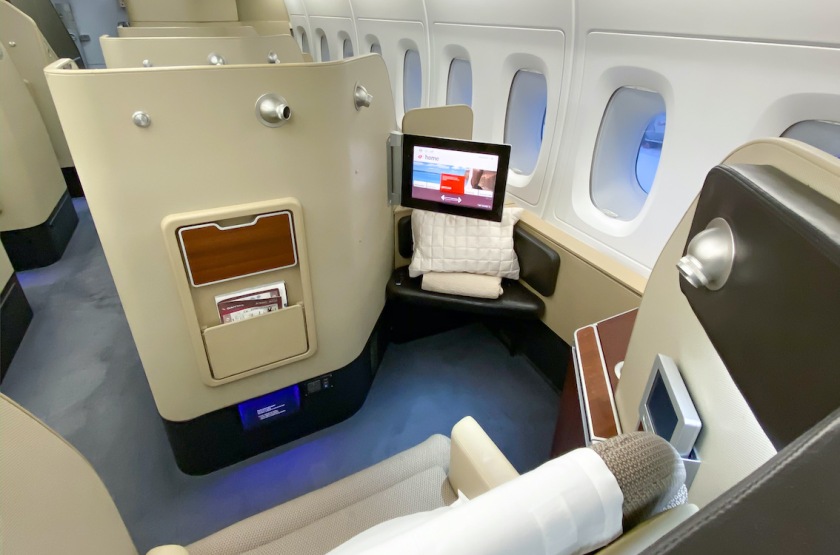 I had been looking forward to this trip for months. I’ve never flown Qantas before, let alone Qantas First Class. Long story short, I booked a round-trip ticket from Manila to Los Angeles and back on Turkish Airlines.

It was the biggest trip of the year since I was away from home for 17 days. The main destination was New Zealand; I would be flying from Singapore to Christchurch via Melbourne, and the moment I had been waiting for was finally here!

I spent a few hours in Singapore to check out the Jewel. After enjoying the newly opened Qantas International First Lounge,
I walked to gate C25, an hour before departure time.

Boarding started at 6:55 PM through door 1L. The first-class cabin on Qantas A380 is located in the front section of the lower deck. Unfortunately, the aircraft I flew on that night wasn’t the newly retrofitted equipment, but it’s interesting to note that it was the very first Qantas’ A380 delivery, named Nancy-Bird Walton.

Upon boarding, a flight attendant greeted and escorted me to Suite 5K. The flight attendant working on my aisle introduced herself and asked how I’d like to be addressed — my bad for being so terrible remembering names! Not only was she so friendly, professional, and charming, but she also made me feel like home. She was so genuine and as enthusiastic as I was — love it! Right off the bat, I could tell it would be a fantastic flight.

On the pictures, the suites may not look as spacious, but in reality, they are massive. Obviously, it’s not a cutting edge first class by any means, but for something that was introduced almost ten years ago, it is incredible.

A few minutes later, the cabin director also came to my suite, introduced himself, and shook my hand. He was lovely and very personable. Once settled in, she offered me a glass of champagne and canapé consisting of caviar tartlet with crème fraînche and beef tatami with oyster sauce and crispy rice.

There were only four other passengers out of 14 first-class seats, and there is a total of 4 cabin crews working in first class. With that ratio, you can bet the service was so attentive and personalized.

A few minutes later, the flight attendant came back to refill my champagne glass and brought me a male amenity kit as well as pajamas by Martin Grant.

Before take-off, I went to the lavatory to change. Usually, I don’t like wearing pajamas on a flight because the cabin tends to be warm.

While Qantas A380 first class cabin doesn’t seem to have individual air vents, it actually does. In fact, there are three of them in each suite from what I can tell. There are two air nozzles on the front and back wall of your suite, and one on the floor. That said, the cabin temperature was perfect.

The main cabin door closed at 7:30 PM, and we pushed back shortly after. However, since there are many evening departure flights, it took a while for us to taxi to the runway, and we were eventually cleared for take-off.

Unlike U.S. airlines, most foreign carriers switch off the seatbelt sign 5 minutes after take-off. The crews then started preparing dinner service. Supper and breakfast services were offered on this short 7-hour redeye flight.

The menu reads as follows:

Mesclun salad with your choice of aged balsamic, lemon dressing or Neil’s vinaigrette

Selection of cheese served with accompaniments

Once we reached the cruising altitude, I had my dining table set up and browsed through the entertainment system. Qantas has pretty decent selections of movies and TV shows. While I rarely watch movies on the plane, for some reason, I was in the mood for one. I decided to watch an Australian drama called Promised — it was good!

Since I had a big meal at the lounge, I opted for a healthier option. To start, I had crab salad with asparagus, peas and sunflower seeds.

It was light and refreshing.

For the main course, I had seared sea bass with oyster mushrooms, braised lettuce and Shanghai noodles.

It was tasty. The fish was flaky and tender, though nothing special. I feel like fish dishes on the plane is a safer bet.

To finish, I had meringue with pineapple, passionfruit, soft coconut cream and toasted almonds, as well as a glass of Lillypilly Noble Blend 2015 dessert wine.

I was stuffed at this point. Once my table was cleared, the flight attendant informed me that she had made the bed for in Suite 3K, two rows ahead — sweet!

Qantas offers excellent bedding in first class that includes mattress, duvet cover, blanket, and two plush pillows. As you can see from the picture above, the mattress is about 2 inches thick, and the duvet cover was very comfortable. By far, this was the best bed I’ve slept on in the sky.

Before calling it a night, I had a quick walk upstairs to check out the lounge area.

Decades ago, I remembered walking up the staircase was such a cool experience, and it never gets old. It was no exception to this beautiful Airbus A380.

As I mentioned earlier, this particular plane was Qantas’ first A380, which has not been retrofitted with the new interior, so the lounge looked rather plain.

I personally prefer ultra long haul flights where I can dine, relax, sleep, and enjoy the flight. Sometimes, it’s a bit difficult to maximize the sleep since I wanted to enjoy the experience. That said, I managed to sleep for a solid 4 hours.

One hour before landing, I woke up and moved back to Suite 5K, while the crews started preparing the breakfast service.

With your choice of:
Vegemite, berry jam, marmalade, honey

I ordered the muesli, fresh fruits, and breakfast bowl, along with a glass of juice latte.

It was excellent, healthy, and light.

By now, you should get an idea of how awesome the flight was. The crews were just fantastic, and everything was so flawless.

But this is the best part…

The crews noticed how excited I was about the flight. Apparently, they discreetly communicated with the captain and arranged a surprise for me. They would love to invite me to the flight deck upon landing in Melbourne.

How cool is that!

I was totally overwhelmed with joy and excitement. I just couldn’t believe it, and of course, I gladly said yes! I was literally like a kid in a candy store!

Before landing, every single crew in first class stopped by my suite thanking me for flying with them and shook my hand. We touched down in Melbourne 2 minutes ahead of schedule.

Once we parked at the gate, I walked to the front of the cabin and met with the two captains, a first officer, and a second officer who was in control during landing. I spent a few minutes there and asked permission to take photos, and bid farewell to the entire crews.

It was my first Qantas flight, and to be quite honest, I had a low expectation because I thought the experience would be similar to what I would have on American Airlines flights, due to their close relationship.

But I was totally wrong!

There was no easy way to describe how fantastic the flight was. The crews were genuinely lovely. They were so welcoming and made me feel at home.

In terms of food, while it was not spectacular, I’m glad Qantas offers something on the healthier side. The amenities were indeed “first-class,” and the bedding was fantastic — it was the best one I’ve had in the sky.

Finally, being invited to visit the flight deck was a pleasant surprise and something I will remember for a long time.

From now on, Qantas will be my first choice of carrier when traveling to the South Pacific, and it should be yours too!